What is the difference between walked up and rough shooting?

Similarities between Walked up shooting and Rough shooting

Throughout the UK Walked up shooting is often referred to as Rough shooting and both are similar. Both are very enjoyable and are experiencing a resurgence in popularity, due to the affordability of this type of sport as well as the sporting challenge they present. 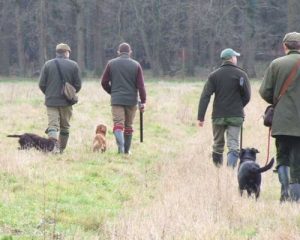 Rough shooting is ‘hunting’ at its most basic and usually involves a small number of guns and dogs walking around a predefined area on a farm or estate boundary in pursuit of birds and ground game (rabbits, hares etc.). Usually the team will not have beaters with them but will work their own dogs in hedgerows, small woods and rough uncultivated parcels of land, flushing and shooting game as they proceed. Depending on the location and time of year, most quarry species will be available, although the areas covered are unlikely to be managed for game and bags tend to be small at 2-5 head of game per gun. The ethos of this type of day is very much ‘shoot it and eat it’. Basic rough shooting is not widely advertised but is a fantastic way to be in the countryside on a small budget.

True walked up shooting tends to be more commercial and suits a team of 4 – 8 guns, usually accompanied by the gamekeeper and possibly few beaters or with dogs. As well as walking up hedgerows, small woods and rough ground, the team will often walk through game crops that have been specifically planted to give cover to game in managed areas. These days are slightly more formal and organised than a rough day with designated areas to cover and refreshment breaks.

To many, the ultimate in walked up sport is ‘mixed species’ days, where the team sets out to bag a specific number of species in varying habitats. This will involve walking up in the usual way as well as occasionally standing for a ‘mini’ drive to maybe shoot ducks lifting from a pond etc. At the right time of year it may be possible to shoot up to 12 different species depending on the skills of the team! There will usually be breaks for refreshments and lunch as in a driven day and the guns could expect to shoot up to 15 head of game each.

In Scotland, walked up grouse is very popular but is very physically demanding as the team will have to walk long distances over heather in pursuit of their quarry. The team will usually walk in a well spaced out line with beaters in between, stopping each time a bird has been shot to allow the dogs to retrieve it. The team are likely to be on the moor all day, often in changeable weather and have to be well prepared. Lunch is normally taken on the hill.

Walked up and Rough shooting compared to Driven Shooting 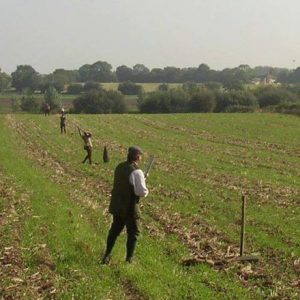 The walked up and rough shooting days differ from driven shoot days in a variety of ways, not least from the spontaneity and unpredictability of the shooting. Walking with gun in hand, the shooter gets very little warning of when a bird may flush and has to be constantly alert and aware of his surroundings as he may only get one chance at a specific quarry.

Shots may be taken in the air or on the ground, raising a significant safety issue with guns having to be fully aware of the position of the other members of the team, as well as the beaters and the dogs.

Stand one walk one shoots

Stand one walk one shoots are another popular type of game shooting which work in following way:

** NOTE ** The rule of thumb is that any birds that fly forwards (away from you) you have to leave for the standing guns. Anything that flies up and over your head you can turn around and shoot.
Whilst a novice can, with help, enter the driven shooting field relatively easily, walked up shooting requires more gun handling and fieldcraft experience. Once mastered, walked up shooting provides unrivalled, sustainable sport.

Yorkshire Shooting Academy offer a wide range of shooting opportunities for both members and non-members, please contact us for more information.